Fire Season is over, but Fire Prevention NEVER STOPS!

The conclusion of fire season is a result of cooler temperatures and continued rainfall throughout Jackson and Josephine counties.

The fire prevention regulations put into effect on June 30 will no longer be enforced. This impacts 1.8 million acres of state, private, county, city and Bureau of Land Management lands in Jackson and Josephine counties.
Although fire season is coming to a close, it does not mean that there is no danger of wildfire. The end of fire season eases restrictions on activities that often can start a fire but does not relieve a person of responsibility for their actions.
Residents need to remember that it is everyone’s responsibility to practice fire prevention protocol. When burning or using any type of fire in the woods or yard, make sure to be in attendance and maintain control of your burn at all times. Clear above and around your burn, with firefighting equipment nearby as a precaution. Residents should contact their local fire department before conducting any burning as restrictions vary among local fire districts.
The firefighters and staff at the Oregon Department of Forestry Southwest Oregon District would like to thank all partnering agencies, support staff and the public for their continued cooperation this fire season.
For more information, please call or visit the Southwest Oregon District unit office nearest to you:
·         Medford Unit, 5286 Table Rock Rd., Central Point. (541) 664-3328
·         Grants Pass Unit, 5375 Monument Dr., Grants Pass. (541) 474-3152
Information is also available online at www.swofire.com
Posted by Alison Lerch at 7:53 AM No comments:

Very dry conditions in southwest Oregon’s forests and wildlands makes it necessary for the Oregon Department of Forestry’s Southwest Oregon District to shut down public use of power-driven and spark-emitting internal combustion engines starting Monday, Aug. 15, at 8:00 a.m.
The pubic regulated use fire danger level will be “extreme” (red) but the Industrial Fire Precaution Level will remain at 2 (two).
These regulations affect the 1.8 million acres of state, private, county and Bureau of Land Management forestlands in Jackson and Josephine counties.
Below are the public regulated use restrictions that take effect Monday:
The following public regulated use restrictions are currently in effect and will remain in effect:
For more information about the Oregon Department of Forestry’s public regulated use regulations, please call or visit the Southwest Oregon District unit office nearest to you:

Posted by Alison Lerch at 8:29 AM No comments: 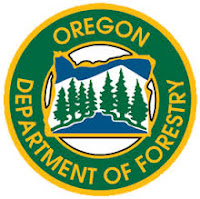 The public regulated use fire danger level will be “moderate” (blue) and the Industrial Fire Precaution Level will be 1 (one).

Last year, fire season started on June 5 and ended October 28. A total of 255 fires burned on lands protected by the Southwest Oregon District, and blackened 347 acres. More than 200 of those fires were started by people and 53 fires by lightning. According to the 10-year average of fires on the district, 230 fires may burn more than 5,600 acres during fire season.

The 2016 fire season may be another very active one. A good snowpack in the Cascade Range and the Siskiyou Mountains recharged most of the southwest Oregon region’s reservoirs, but may have little positive effect on wildfire activity in the district, most of which covers lowelevation grass and brush lands and mid-elevation forests. Residual snowpack is at higher elevations on national forest and national park lands.

While spring was reasonably wet, it was also 6-8 degrees warmer than normal. Abundant grass and weed growth across the district will provide plenty of fuel for wildfires, once the vegetation fully cures. In addition, tree mortality from the drought has left numerous dead and dying trees scattered across the landscape. These may moderately increase the severity of forest fires in some parts of the district.

Beginning Friday, the burning of debris piles and the use of burn barrels for burning debris will no longer be allowed. Other public regulated use restrictions on ODF-protected forestlands include:


Under Industrial Fire Precaution Level 1 on ODF-protected lands, commercial operations, such as timber harvesting conducted on forestlands, will be required to have fire suppression equipment on the job site at all times. A watchman must also be provided.

For more information about the Oregon Department of Forestry’s fire season regulations, please call or visit the Southwest Oregon District unit office nearest to you:


Fire season information is also available online at www.swofire.com.
Posted by Alison Lerch at 10:46 AM No comments:

Prevent Your Campfire From Becoming a Wildfire

Sitting around a campfire is one of the special times we all enjoy, but campfires are also a major cause of wildfires. May is Wildfire Awareness Month, and Keep Oregon Green, the Oregon State Fire Marshal, and the Oregon Department of Forestry urge Oregonians to follow these basic outdoor safety tips: 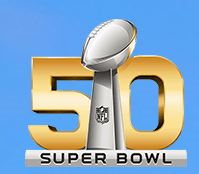 Super Bowl Sunday ranked #6 behind Thanksgiving, Christmas and Memorial Day in 2013 as having the largest number of home fires on a particular day. According to the National Fire Protection Administration, 590 home cooking fires occurred on Super Bowl Sunday in 2013. That’s a 25% increase over the average number of fires on a typical day!

The U.S. Department of Agriculture (USDA) tells us that Super Bowl Sunday is also the second biggest day of the year for food consumption! So if you’re planning to whip up some tasty snacks for this year’s game, make sure you add kitchen fire safety “plays” to your line up.

What’s the best way to do that? The U.S. Fire Administration (USFA) offers a handful of great tips below that are easy to follow:

1. Kitchen HuddlePrepare your cooking area. Use back burners or turn pot handles toward the back of the stove. Move things that can burn away from the stove. Keep a timer handy and use it when you’re roasting or baking.

3. DefenseStay awake and alert while you’re cooking. Stand by your pan. If you leave the kitchen, turn the burner off. Keep a large pan lid or baking sheet nearby in case you need to smother a pan fire.

4. Illegal ContactPrevent burns when you’re cooking. Wear short sleeves, or roll them up. Don’t lean over the burner. Use potholders and oven mitts to handle hot or steaming cookware.

5. Defensive LinemenChildren need constant adult supervision. If you have young children in the home, keep them three feet from anything that can get hot, including the stove. Put hot objects and liquids beyond a child’s reach so they can’t touch or pull them down. Never hold a child when you cook.

6. Touchdown!Keep safety in mind when serving on game day, too. If you burn candles, position them out of reach of children and away from anything that can burn. Consider using flameless candles that are lit by battery power instead. Food warmers and slow cookers get hot. Place them toward the back of the serving table so they won’t get knocked off. Provide hot pads to prevent burns. Light the chafing dish fuel can after it is placed under the warmer. Make sure nothing comes in contact with the flame. If young children are in your home, supervise them and keep matches and lighters locked away.

Enjoy the game, everyone, and please stay safe!
Posted by Brian Ballou at 11:48 AM No comments: 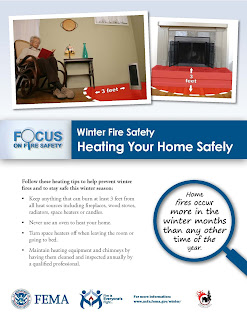 Heating equipment is a leading cause of home fire deaths. Half of home heating equipment fires are reported during the months of December, January, and February. Some simple steps can prevent most heating-related fires from happening.


[ Sources: National Fire Protection Association, the U.S. Fire Administration and the Federal Emergency Management Agency ]
Posted by Brian Ballou at 8:34 AM No comments:

Providing fire prevention education to the Rogue Valley since 1976